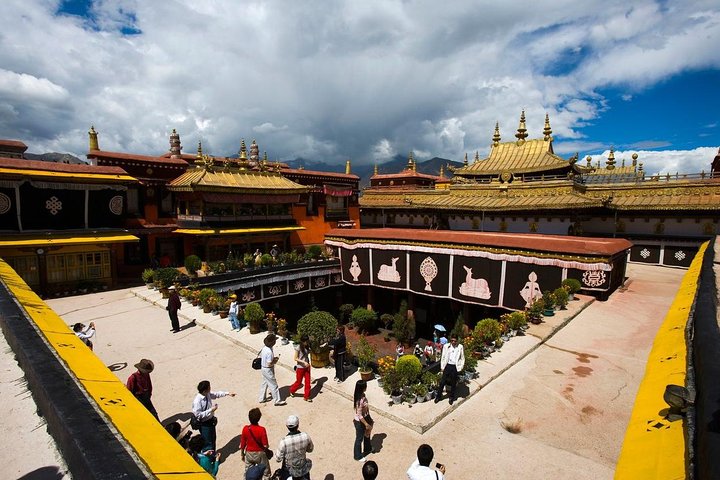 Day 1: Arriving Lhasa by air or rail (B) Upon your arrival at Lhasa Railway Station or Lhasa Gonggar Airport, your guide and driver will pick you up and transfer you to the hotel for acclimatization. Enjoy the rest of day at leisure strolling around this holly city.  Overnight: Rama Kharpo Hotel Day 2: Lhasa - Jokhang Temple - Bakhore Square - Sera Monastery (B) Rise early this morning to visit Jokhang Temple, which is located on Barkhor Square and considered as the most sacred and important temple in Tibet. Listed as an UNESCO World Heritage Site, the style of the temple is a fusion of Indian Vihara, Tibetan, and Nepalese. Next, you will explore nearby Barkhore Square where pilgrims and locals circumabulate Jokhang Temple for prayers as well as showing their devotion.  Lunch is at your own expense but your guide will gladly provide ideas and suggestions. After lunch break, you will visit Sera Monastery (Wild Roses Monastery), which was surrounded by wild roses in bloom when built hence the name. The monastery consists of two sections. The eastern section hosts the Great Assembly Hall and dwellings while the western section houses the three well-known colleges: the Sera Je Dratsang, the Sera Me Dratsang, and the Ngakpa Dratsang. All three are instituted by Tsongkhapa as monastic universities catering to monks within the age bracket of 8 to 70. You will have ample time to explore the monastery at your own pace before heading back to the hotel. Overnight: Rama Kharpo Hote Day 3: Lhasa - Potala Palace - Norbulingka Summer Palace (B) After breakfast, you will visit world famous Potala Palace which is named after Mount Potalaka, the mythical abode of the bodhisattva Avalokiteśvara (the god of compassion). Now an UNESCO listed World Heritage Site and a museum, Potala Palace was a primary residence for the Dalai Lamas until mid-1900. The palace consists of a conglomerate of structures including White Palace, the living quarter of Dalai Lama, Red Palace, which is devoted to religious study and prayer, the Great West Hall, along with several chapels and the tomb of 13th Dalai Lama. Explore the palace till breaking for lunch which is at your own expense but your guide will gladly provide recommendations.   Later in the afternoon, continue on with a visit to Norbulingka Palace, the Jeweled Park Palace and summer palace for successive Dalai Lamas. Norbulingka blends gardening with architecture and sculpture arts of various Tibetan ethnic groups. More than 30,000 cultural relics of ancient Tibetan history are preserved here. Overnight: Rama Kharpo Hotel Day 4: Departing Lhasa This morning, your guide and driver will transfer you to Lhasa Gonggar Airport or railway station where this tour concludes.

This 3-Night Lhasa City tour offers you insights on fascinating history and unique culture of Tibet. Step into the past as you travel through the fabled capital city of Tibet. If you have limited time to experience glorious Tibetan culture and what it has to offer, this is the perfect tour. You will visit major attractions including Bokhang Temple, Bakhore Square, Sera Monastery, Potala Palace, and Norbulingka Summer Palace during the trip.

Confirmation will be received at time of booking
Minimum number is 2 people per booking.
Lhasa is only open to travelers with packaged tours prior to arrival. A tour guide from the same local tour operator must accompany the travelers on daily basis and travel plans MUST be arranged in advance.
Travelers must obtain a Tibet Travel Permit 10 days prior to tour departure date.
All Tibet Travel Permits are issued by Tibet Travel Bureau in Lhasa only. Foreign nationals are unable to obtain a Tibet Travel Permit directly from Tibet Travel Bureau. Your local tour operator will assist you with permit application. However, in order for permits to be granted, travelers Must have tours booked for the whole duration of stay.
Tibet Travel Permits - Tibet Visa: There are two types of permits issued for traveling in Tibet - Tibet Entry Permit (TTB, an equivalent of visa for Tibet) and Alien Travel Permit (PSB), which is also call Tibet Travel Permit, Tibet Visa, or Lhasa Visa. Your local tour operator provides both types of permit for travelers who have placed booking for tours.
TTB Permit – Tibet Entry Permit – "Tibet Visa" or "Lhasa Visa:" Travelers Must show this permit to purchase airline tickets and upon check-in at the airport if entering Lhasa by air. Travelers who plan to enter Tibet with tour groups by ground transportation also need TTB which will be arranged by your local tour operator. Aliens who plan to visit “restricted” areas in Tibet Must obtain a PSB Permit issued by PSB (Public Security Bureau) of Tibet.
Chinese Group Visa from Nepal: This visa is only applicable to travelers who entry Tibet from Nepal by air or overland. All foreign nationals entering Tibet from Nepal MUST hold a Tibet Group Visa which can only be obtained from the Chinese Embassy in Kathmandu. The format of Tibet Group Visa is an A4 sized paper printout with your essential information including names of all members with the group, passport numbers, genders, nationalities, dates of birth, and occupations. The dates of entry and exit are precisely noted on the document. All members of the group MUST enter Tibet and exit China together. The Chinese embassy in Kathmandu issues two copies of original Tibet Group visa to each traveler. One copy will be collected by Chinese Custom upon entry. Another MUST be shown to the custom upon exiting China. If travelers plan to enter Tibet from Nepal, DO NOT apply for Chinese visas in traveler's home countries or elsewhere; otherwise, they will be cancelled and travelers will need to apply for a Tibet Group Visa at the Chinese Embassy in Kathmandu.
Group travelers Must provide below information at time of booking:
Exact date of entry into Tibet of each member of the group, last destination visited prior to entering, intended transportation for entering Tibet (air or rail). Please note that travelers may only enter Tibet on that specific date and from the last destination visited.
Number of travelers in your group
Expiration dates of travelers' Chinese Visas.
Travelers' occupations
If travelers entering Tibet by air, please provide mailing addresses and phone numbers in mainland China where local tour operator could mail the original copy of permit to. The cost for mail service is RMB$180 and takes 3 to 4 days for regular post and RMB$680 for express post.
A trip deposit of USD$100 per person at tour operator's Bank of China account is required.
Individual travelers Must provide below information at time of booking (please note that it is extremely difficult to receive a Chinese visa extension in Tibet. Please do so before traveling to Tibet):
A color scanned copy of travel's passport and current Chinese visa. Traveler's Chinese visa must be valid throughout the duration of stay in Tibet.
Tourist (L) visas require no extra documentation.
Business (Z and F) visas require a copy of travelers' work permits.
Student (X) visas require proofs of travelers' enrollment at travelers' place of study. Student ID cards are a good form of proof. If student ID cards are unavailable, letters from travelers' universities with the school chops will be sufficient. Please email high resolution color scan images of travelers' passports, Chinese visas, and any other required documents to local tour operator.
Entering Tibet by air: local tour operator will send original copies of permit by postal service to travelers' destination addresses in mainland China. Permits may not be sent to addresses outside of China. Travelers may provide local tour operator travelers' hotel addresses, phone numbers, and the name of traveler who places the booking so local tour operator could mail permits to travelers. Cost for mailing service is RMB$180 and takes 3 to 4 days by regular post and RMB$680 by express post. If travelers don’t require airport pickup by tour operator, travelers may take airport shuttle bus to Lhasa. Once travelers arrive in Lhasa, please contact local tour operator who will dispatch a guide to transfer you to the hotel.