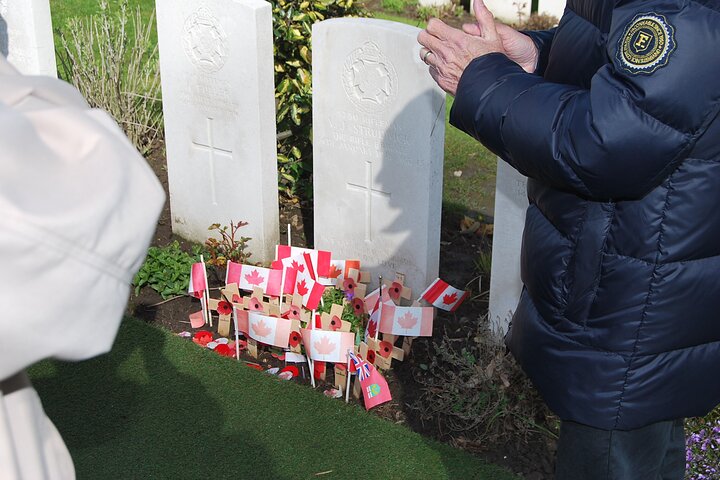 Day 1: Paris-Ypres-LilleMake your way to the Ecole Militaire metro station in Paris to meet your guide nearby and climb into a comfortable minivan for the start of the 3-hour drive to Ypres Salient. This is the area around the Belgian city of Ypres that figured prominently in the Western Front of World War I. Several of the most critical and deadliest conflicts of the war took place here. See for yourself the land where, in the years 1914-1918, hundreds of thousands of young men on all sides of the war fought and died. In particular, British Commonwealth soldiers made up a large part of the forces around Ypres, with roughly 185,000 Commonwealth troops dying in the Ypres Salient by the end of the war. Travel to the most important WWI battlefields, monuments, memorials and cemeteries in and around Ypres, including the Tyne Cot Cemetery, John McCrae's Essex Farm site, Langemark German Cemetery and Vancouver Corner, a memorial to Canadian soldiers. Try to imagine the Battle of Hill 60 as you walk with your guide through the modern landscape, forever damaged from the war. Visit the city of Ypres to tour St George's Chapel, and head to the Menin Gate to attend the Last Post ceremony. This tradition takes place every evening at 8pm, a 'salute to the fallen,' and day-trippers rarely have a chance to see it. By staying the night in Lille, you're able to witness this moving tribute. When the ceremony is complete, travel with your guide to your hotel in Lille. Overnight: Ibis Lille Opera or another similar Lille hotel Day 2: Lille-Somme-Paris (B)Take advantage of the included breakfast at your hotel before you meet your guide to being your second day touring the local WWI sites. This day is dedicated to the Somme, an area of France whose name is almost synonymous with the brutality of WWI. Visit the site of the Battle of Pozières, the Thiepval memorial, the Beaumont-Hamel Newfoundland Memorial, the Villiers-Bretonneux Australian National Memorial and the town of La Boiselle, where you'll see the enormous Lochnagar Crater. The crater is 300 feet across and 90 feet deep, the largest crater made during a time of war. After seeing these critical places in the Somme, climb back into the minivan for the return drive to Paris.

Spend two days immersing yourself in World War I history as you visit the battlefields, memorials and cemeteries of Belgium and northern France, where some of the deadliest conflicts took place. On this tour from Paris to the Ypres Salient and Somme, your expert guide will take you to the site of the Battle of Hill 60, the site of the Battle of Pozières, the Lochnagar Crater, Tyne Cot Cemetery, the Villers–Bretonneux Australian National Memorial and more. You’ll also attend the Last Post ceremony in Ypres before spending the night in Lille in a 3-star hotel, with breakfast included. This 2-day tour will shed a whole new light on WWI, enriching your understanding of the successes, failures and plights of all nations involved. Numbers are limited to 12 people on this small-group tour, so you’ll enjoy a more personalized experience.

Cancellation Notes: If you cancel at least 7 days in advance of the scheduled departure, there is no cancellation fee.
Additional Information

Accommodation is in double or twin rooms with private bathrooms
1 regular size suitcase and 1 piece of hand luggage allowed per person
Tour may not be suitable for children under 10 years old
Not wheelchair accessible
Near public transportation
Most travelers can participate
This tour/activity will have a maximum of 12 travelers
FAQ
What time does Somme and Ypres Battlefields WWI 2-Day Trip from Paris start?

Somme and Ypres Battlefields WWI 2-Day Trip from Paris will start at 10:45 AM.


Which attractions will I visit with Somme and Ypres Battlefields WWI 2-Day Trip from Paris?


How much is Somme and Ypres Battlefields WWI 2-Day Trip from Paris?


What is the Somme and Ypres Battlefields WWI 2-Day Trip from Paris cancellation policy?