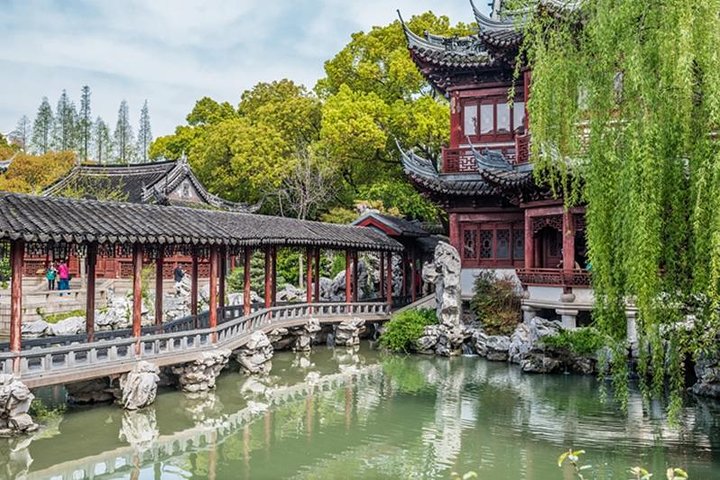 Start your private tour with a hotel pickup, and set off with your guide by air-conditioned vehicle. On route, listen as your guide shares the history of this dynamic city. Sitting on the River Yangtze delta, Shanghai began life as a fishing village before the British named it a treaty port in 1842. The British, French, and Americans then established enclaves here, turning the city into the ‘Paris of the East’ during the early 20th century. Today, Shanghai is China’s economic hub, offering a heady mix of high rises, colonial architecture, and traditional Chinese charm. Stop at the Yuyan Garden, in Shanghai Old Town. Believed to date back 400 years, this classical Chinese garden is composed of exquisite pavilions, ponds, bridges and sculptures. Wander through the decorative and calming landscapes, camera in hand, and learn about the garden’s history. From here, visit the Jade Buddha Temple, a working Buddhist temple and one of Shanghai’s richest. Explore the halls and see the two revered Buddha images — one carved from pale green jade, and the other sculpted from white jade. Break for lunch at a local Chinese restaurant, and then continue to a silk reeling mill. Watch the process of reeling, where raw silk is produced from silkworm cocoons and teased into threads, and listen to tales of China’s ancient silk industry. Next, travel to the Bund, the famous waterfront of imposing 19th-century buildings constructed by the colonial powers. Admire the grandiose architecture here and absorb the views across the Huangpu River to the skyscraper-filled Pudong district before heading for the Nanjing Road, Shanghai’s main shopping street. Soak in the bustle of this pedestrianized street, a microcosm of modern China, and take a stroll to peruse the stores and purchase souvenirs. After eight hours, your tour ends with a hotel drop-off.

Explore the vibrant metropolis of Shanghai and feel the perfect mixture of old and new, east and west. Attractions you will visit include Yuyuan Garden, Jade Buddha Temple, the Bund, Nanjing Road Pedestrian Street, Xintiandi and Wulixiang (Shanghai "shikumen" Museum). Explore as your private guide gives you the history of each location. You will also enjoy a traditional Chinese lunch in this day tour. No Shopping and flexible

Confirmation will be received at time of booking
Children must be accompanied by an adult
Not wheelchair accessible
Near public transportation
Infant seats available
Not recommended for travelers with back problems
Not recommended for pregnant travelers
No heart problems or other serious medical conditions
Most travelers can participate
Vegetarian or gluten-free option is available, please advise at time of booking if required.
You will receive details about the tour guide and pickup in your voucher the day before. And the tour guide will also call you via hotel or leave a message for you about pickup time the night before tour.
Hotel pickup and drop off services are available within the Middle Ring Zone of Shanghai.
This experience requires good weather. If it’s canceled due to poor weather, you’ll be offered a different date or a full refund
This is a private tour/activity. Only your group will participate
FAQ
What time does Private Full-Day Tour: Shanghai Past and Present start?

Private Full-Day Tour: Shanghai Past and Present will start at 8:30 AM.


Which attractions will I visit with Private Full-Day Tour: Shanghai Past and Present?


How much is Private Full-Day Tour: Shanghai Past and Present?

Private Full-Day Tour: Shanghai Past and Present price starts from $147.20.


What is the Private Full-Day Tour: Shanghai Past and Present cancellation policy?

Private Full-Day Tour: Shanghai Past and Present cancellation policy: For a full refund, cancel at least 24 hours in advance of the start date of the experience.