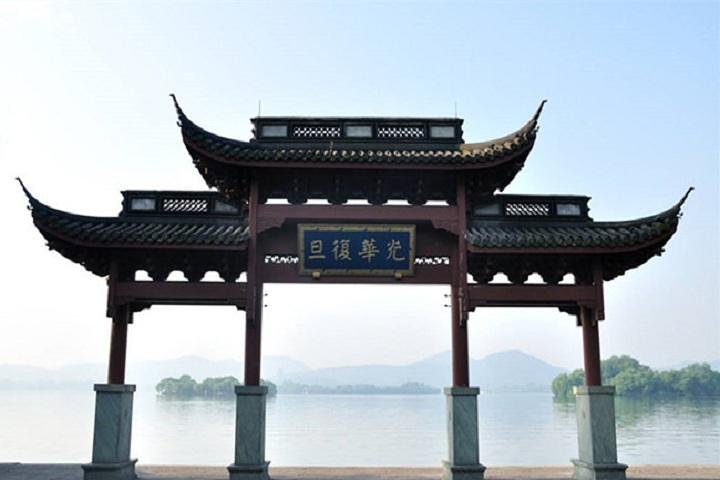 Pick up from your midtown hotel in Hangzhou or the Hangzhou Train Station and head to the foot of Baoshu Hill (Precious Stone Hill). Situated on the north bank of the West Lake, Precious Stone Hill is over 200 meters (656 feet) high. Its scenic feature is many red rocks spreading all over the slopes of the hill, which sparkle like diamonds inlaid in the rosy morning or evening sunlight.The hill is not high, only taking you about 30-40 minutes to reach the top. There you can have a panoramic view of West Lake. On top of the hill, erected Baoshu Pagoda in Northern Song Dynasty. It is one of the outstanding landmarks around the lake. Looking from afar, Baochu Pagoda is creating an incredible peace and leisure atmosphere with lush trees, blue sky and still lake. Originally builtin 963 AD, the construction of Baochu Pagoda was presided by Wu Yanshaung, uncle of the king of Wuyue kingdom, to place sarira of Master Shandao, an eminent monk in the Tang Dynasty. Like a slim beauty, it stands on the hill, just a backgroud for the "Broken Bridge". Then move on to the Solitary Hill, situated at the northwestern corner of West Lake, is 38 meters (about 125 feet) above sea-level, and covers an area of 300 mu (nearly 50 acres). It is the lowest summit, compared to other hills around West Lake, but it is also the biggest island in the lake, and the only natural island as well. Solitary Hill Island is home to several ancient relics, including imperial palaces in the successive dynasties from the Southern Song to Qing Dynasty periods. Attractions include Zhongshan Park, named after Sun Yat-sen, popularly known as the Father of Modern China, and the Xi Leng Seal Society, an academic community devoted to the study of seal-cutting. After Chinese lunch, you are taken to the area near to the top of the Jade Emperor Hill. Then walk to the top of the hill. Jade Emperor (Yuhuang) Hill stands between the West Lake and Qiantang River with an elevation of 239 meters. The present name was given in Ming Dynasty when a Taoist temple called Lucky Star was built on the hill and a shrine of Jade Emperor put in it. It was known as one of the three Taoist temples at West Lake in the late Qing Dynasty.From the top of the hill, you can have a bird eye's view of the lake and city and devour the beautiful view of the hills circled West Lake and the peaceful Qiantang River. Come down and continue to ascend Wu Hill near the downtown area. A solemn seven-floor high tower (Chenghuang - Pavilion for the City God) is perched on the elegant 94-meter high evergreen hill stretching into the city area. From the hill you have the most gorgeous panoramic view of the city as well as the lake. A wax museum is built in the tower housing 28 historical figures.  After the whole day tour, you are transferred back to your midtown hotel in Hangzhou or the Hangzhou Train Station and your Hangzhou city hills climbing Day trip ends.

Hangzhou was described by Marco Polo as the world's most beautiful city. It is built along the shores of West Lake and surrounded by the hills on its three sides. Climbing the hills allows you to have a fantastic view of West Lake and the city itself as well explore the historical sites on the hills.

Hangzhou City Hills Climbing Day Tour will start at 9:00 AM.


How much is Hangzhou City Hills Climbing Day Tour?

Hangzhou City Hills Climbing Day Tour cancellation policy: For a full refund, cancel at least 24 hours in advance of the start date of the experience.