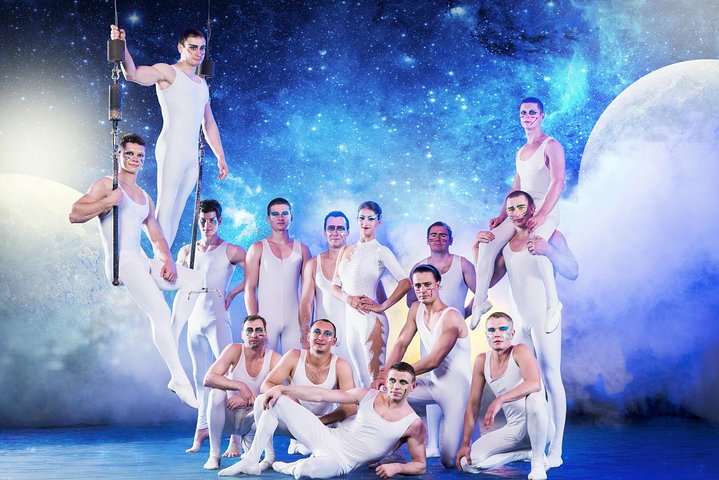 Select your required Chimelong International Circus show ticket when you book, choosing a second-class ticket or upgrading to a first-class ticket for seats near the center of the open-air amphitheater, with near square-on views of the stage. Then, after late-afternoon pickup from your downtown Guangzhou hotel, travel by air-conditioned coach to the stunning, 8,000-seater arena. Along the way, look forward to the show, considered the finest in Asia and one of the most sought-after tickets in town. Established in 2000, this fast-paced spectacle of acrobatics, theatrics, comedy, and dance is the world’s only non-traveling circus show and ideal for all ages. On arrival, take your seat and feel the anticipation build as showtime approaches. Then, lose yourself in the color and excitement as the entertainment unfolds on stage. Watch spellbound as over 300 elite circus artistes from more than 20 countries perform everything from breathtaking stunts and dances to processions and dances. Be swept up by mystical dances, clown acts, and carnival parades, and hold your breath as skilled acrobats perform daring tricks on high wires, fiery wheels, and suspended glass rings. Plus, be dazzled by laser shows, aerial ballets, and interactive magic. The show ends with an exhilarating diving act, with divers performing an unforgettable water and trampoline finale. After the 1.5-hour show, enjoy some free time to stroll, eat, or shop at the stores and restaurants outside the arena before catching your return coach and finishing with a drop-off at your downtown hotel.

Founded in 2000, with more than 8,000 seats in the circus stadium, Chimelong International Circus is not only the best circus in Asia but also the world’s largest permanent circus. You will not want to miss their performance when you are in Guangzhou. This tour is available every evening with pickup service from more than 40 hotels in downtown Guangzhou.

Confirmation will be received at time of booking
The best viewing areas are the center seats in the theater. VVIP, VIP, and 1st class tickets are reserved seat tickets
Tickets for Chimelong International Circus are not refundable or extendable
2nd class tickets are general seating; the audience may sit anywhere within the allocated sections in Gray Zone
1st class tickets are reserved seats in Purple Zone
Hotel information should be provided 24 hours before departure.
Hotel pickup and return transfer to your hotel in downtown Guangzhou only. If your hotel is located in outskirt or a town near Guangzhou, for instance, Panyu, Foshan, Shunde, Nanhai, please do not book this package. The local tour operator might reject your booking and arrange refund.
This package is not valid in Canton Fair period from April 14 to May 05, and October 14 to November 05.
No refund for no show or late arrival.
Not wheelchair accessible
Near public transportation
Most travelers can participate
This tour/activity will have a maximum of 15 travelers