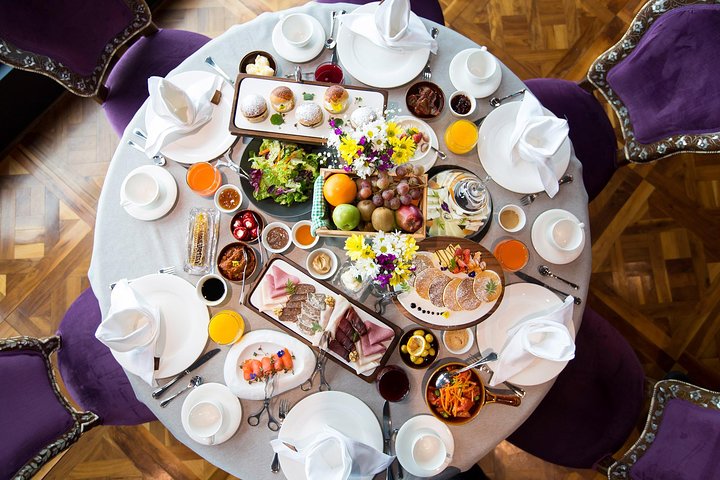 Azerbaijani cuisine refers to the cooking styles and dishes of Azerbaijan. By participating in the tour of Azerbaijani cuisine, you will witness the richness of its cuisine, in addition to the historical monuments of Azerbaijan, located at the crossroads of east and west. For the people of Azerbaijan, food is an important part of their culture and is deeply rooted in the history, traditions and values. Azerbaijani cuisine, one of the oldest and richest cuisines in the world, combines the history of culinary culture, its philosophy, table psychology, traditions, as well as practical factors as an important part of material culture. The fact that most dishes are prepared on a special stove, barbecue, plate and earthenware gives the food a special taste and aroma. Azerbaijani cuisine includes more than 40 different plov recipes. The use of spices, vegetables and halal foods is predominant in Azerbaijani cuisine, where the vast majority of the population is Muslim. By participating in this tour, you will have a chance to taste some of the dishes of your choice, prepared according to your own taste, in local restaurants, where Baku residents have lunch every day.

You will get advise in dish choosing according your needs and requirments.We will advise you what type of Azerbaijani dishes can be your favorite according your requirment.You will get information about Azerbaijani food culture and preparement methods and also you will get advise in choosing.Restaurant's bill will be separated and will paid according your orders. You will pay to the restaurant for dishes which you choose for tasting, Restaurant's bill can variate from 15-60 azn for 1 person according to your choice. Please, contact us via WhatsApp after your booking.


Which attractions will I visit with Azerbaijani Cuisine Tour?


How much is Azerbaijani Cuisine Tour?

Azerbaijani Cuisine Tour cancellation policy: For a full refund, cancel at least 24 hours in advance of the start date of the experience.